With equal parts patience and passion, Michael Durham photographs bats in the dead of night in Oregon's Deschutes National Forest.
Follow the link to the Daily Mail feature about photographing the small, fast, mysterious night flyer.

From Suzi, "So excited to have just signed with Owlkids Books for my next children's book series, Wildlife Rescue. Coming in 2015.."
Here Eye on the Wild series of children's books published by Frances Lincoln Children's Books include Elephant, Gorilla, Cheetah, Lion, Brown Bear, Orangutan, and Sea Otter. Suzi spends much of the year in the field photographing wildlife, specializing on family life and growing up wild. We can't wait to see what this next series on wildlife rescue brings.

From it's source in Angola, the Okavango River winds it way down to Botswana pouring in the Kalahari Desert spreading out into the Okavango Delta. The heart of the delta is a year round swamp providing life to a wide variety of plants and wildlife in this arid land. The hippos aren't the only Botswanans grateful for the water. Rain or "Pula" is so important in this arid land that the same word is also used for their currency. In recent years the river and delta has faced threats from dam projects and diamond mining.

BBC Wildlife magazine is featuring images from Suzi Eszterhas latest book A Future for Cheetahs in their July 2014 issue. For those who aren't familiar with BBC Wildlife or cannot find in at your local bookstore, a gallery of images from the story is posted to their website.

Suzi Eszterhas of an adult male lion grousing under the attention of his cub made a terrific pre-Father's Day appearance as the Bing-US home page the past weekend.

Vote to Save the Great Barrier Reef

Did you know that 6 out of 7 of the world’s endangered turtle species, like this Green Sea Turtle, can be found along the Great Barrier Reef. UNESCO is gathering signatures to raise awareness of ecosystem's delicate balance and encourage Australian lawmakers to prevent dumping in waters around the reef thereby preserving a World Heritage site and important biome.

The popular PBS program ANTIQUES ROADSHOW maintains a policy of only wildlife related items featuring which are legal under U.S. law including the Endangered Species Act and U.S. regulations for implementing the (CITES). They have also just announced that Elephant tusks will no longer be accepted for appraisal. One more reason to love the Roadshow. 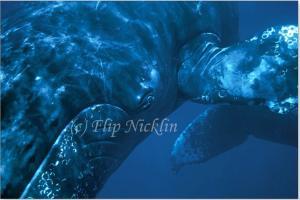 With patience and calm, Flip Nicklin was able to get eye to eye with this friendly singer. Years ago it was Flip's free-diving ability which enabled him to photograph the underside of a singing humpback without the startling bubbled of a SCUBA tank, thereby enabling researchers to determine that singing humpbacks are all males. Years later we still don't know why they sing or what they're saying. As one of the founding members of Whale Trust, Flip Nicklin continues to work with researchers to unearth the secrets of the deep- and particularly those of the Humpback Whale.

In honor of the upcoming World Oceans Day, here is a great image of Clown Anemonefish nestled in the tentacles of their host anemone. Clownfish and sea anemones have a mutualistic relationship. Anemonefish are unaffected by the toxins found in the sea anemone's tentacles which provide the tiny fish with shelter and protection from predators which don't have the same immunity to the toxins. In return, fish excrement fertilizes algae living in the host which in turn keep the anemone healthy and happy.

Suzi is proud to announce her exhibit, with 100% of the proceeds benefiting TigerTime - Save the Tiger, at the opening of the Wildlife Artist of the Year at the Mall Galleries in London.