Tonight is the Night

Tonight is the night! If you are on the East coast of the US, go out at night to the beach to see the spawning of the amazing Atlantic horseshoe crabs – Jurassic Park come alive. These animals come out in huge numbers during the full and new moon high tides of May and June, but the full moon in May is usually the best time to see them.

A Window on Eternity by Piotr Naskrecki and E.O. Wilson

To friends in the Boston Area. If you have not reserved your spot for the Harvard Museum Gorongosa event this Saturday (May 17th), there is still time. The event is free but prior registration is required. The event starts with film screenings at noon, followed by lectures by E.O. Wilson, Greg Carr, and Piotr Naskrecki in support of their new book A WINDOW ON ETERNITY: Exploring Mozambique's Gongorosa National Park [produces as part of Dr. Wilson's campaign to document every animal species worldwide. http://reservations.hmsc.harvard.edu/Info.aspx?EventID=17

Don't be fooling by the rosy pink coloration. This orchid mantis is a fearsome predator, perfectly camouflage against it's host orchid. It's prey will never seem it coming. 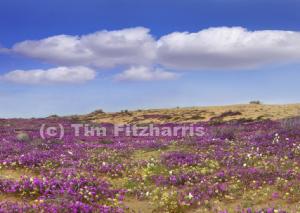 In honor of National Wildflower Week, here is an image of Sand Verbena by Tim Fitzharris.

A 10-day polar bear research expedition by the Norwegian Polar Institute has just been completed. Traveling to Svalbard a team of researchers placed twenty satellite collars on female polar bears to track their travels on the peninsula. Males and cubs cannot be included in the study; their heads are smaller than their necks so collars would just slip off. The collars will record temperature, the amount of time and depth that the animals spend in the ocean and exposure to daylight. With this information the researchers will be able to determine how frequently the bears hunt and how long they stay in their dens. This data will help answer the question about how polar bears will respond to less and less sea ice. Global warming has consistently reduced the amount of summer sea ice that the bears use as platforms where they hunt seals and other marine prey. The scientists predict that their findings will indicate that the bears are moving north to colder climes.

Lonely Horseshoe Crabs will arriving en masses as part of the annual migration and courtship season. Eager wildlife enthusiasts and photographers will follow. If you haven't seen this spectacle, viewing days this year will be around the full and new moons of May and June: 5/13- 15, 5/27-29, 6/12-14, 6/25-27. You may even run into Piotr Naskrecki, as many of our photographers are also migratory creatures following the earth's natural rhythms.

A Future for Cheetahs photography by Suzi Eszterhas

Congratulations to Suzi Eszterhas on the publication of A Future for Cheetahs with the Cheetah Conservation Fund.

A Future for Cheetahs is a simple and elegant large format book featuring Suzi Eszterhas incredible photography that provided insight on the past, present and future of cheetahs in the wild. World renowned cheetah expert Dr. Laurie Marker provides commentary.

Through the eyes of the cheetahs, Suzi brings us face to face with some the the rarest and most beautiful images taken of wild cheetahs. Together the photos and stories weave a tapestry of life on the savanna and the conservation initiatives that provide hope for the survival of the species.

Suzi Eszterhas is a professional wildlife photographer based in California. She specializes in documenting the family lies of endangered species and is well know for her unprecedented work with newborn animals. Her images have been published in magazines and newspapers around the world including: TIME, Smithsonian, BBC Wildlife, Ranger Rick and National Geographic Kids. She is the author of Eye on the Wild, a series of children's book about wildlife. Suzi is in the field for many months of the year, following stories and leading photography tours all over the world.

Prints, cards and phone cases featuring Suzi's images are available from the A Future for Cheetahs gallery.