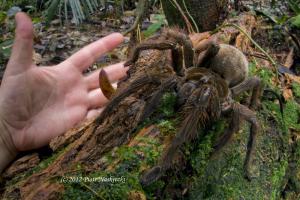 Piotr Naskrecki's photos of the Giant Bird-eating Spider have been getting a lot of attention this week. You may have seen them on MSN.com, the HuffingtonPost.com, ABC News, Fox News or even the Today show. Check out this link to his blog The Smaller Majority.
http://thesmallermajority.com/?s=goliath It's a fascinating insight into the life of the smaller critters of this works, without the crazy sensational headlines.

By Presidential Proclamation, and continuing a project started by the Bush administration, the President Obama has expanded the size of the Pacific Remote Islands Marine National Monument from 83,000 square miles to 490,000. At three times the size of California and nearly as large as Alaska., it is the world's largest marine sanctuary. Protected islands include Hawaii, Wake Island, Kingman Reef and Palmyra Atoll, Johnston Atoll, and Jarvis Island.

Save the Date for WHALE TAILS 2015 in Maui

Whale Tales, hosted by Whale Trust Maui, is one of the world’s top whale research and education events. Whale Tales is a four-day event, with presentations, receptions and opportunities to network with world-renowned personalities in whale research. You can hear directly from researchers about their most recent discoveries; view stunning underwater photography and video of whales in their natural environment; take a benefit whale watching cruise hosted by presenters and more! Held every year over President’s Day week-end, presentations are free and open to the public on Saturday, February 14 and Sunday, February 15 from 10 am – 4 pm at Lahaina’s Maui Theatre (home of ‘Ulalena). Photo by Flip Nicklin, one of the founders of the non-profit Whale Trust.

Ricked from the Headlines a Ranger Rick Photo Expedition

Together with the National Wildlife Federation, the G2 Gallery is putting together an exhibit of some of the most exciting and newsworthy nature imagery which has graced the pages of Ranger Rick magazine. Among the featured photographers, prints of Pete Oxford and Christian Ziegler's work are available through AnimalsandEarth.

Talking to and about Jaguars 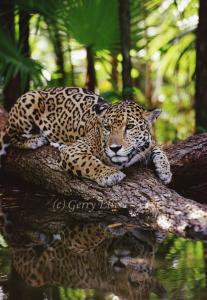 Just listened to terrific NPR nterview. Diane Rehm talked to Alan Rabinowitz about his experiences with Jaguars. He is one of the world’s leading experts on big cats and CEO of Panthera, a nonprofit organization devoted to saving wild cat species. Probably best known for his children's book A Boy and Jaguar, he tells some terrific stories. Paste the following link into your browser to find the podcast:

It's a must listen for lovers of big cats.

There image posted is by photographer Gerry Ellis and we love the sense of tension in the cat and the calm of it's reflection.

Dolphins in Whales Squeal with Pleasure 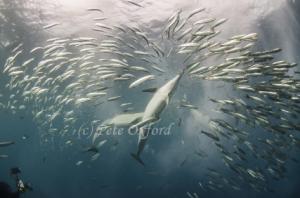 Pete Oxford's fantastic shot of Long-beaked Common Dolphins feeding on schooling Sardines off of South Africa is the perfect illustration for the Telegraph's story on dolphin emotions. Click the more link to read the story.

On August the 10th we celebrate World Lion Day to raise awareness of threats faced by the King of the Jungle. A population decline of 30% over the last twenty years is linked primarily to disease, reduction of prey animals and human activity - trophy hunting, disruption of habitat and killing at the hand of farmers protecting livestock. With the human population in Africa estimated to double by 2050, the pressures faced by lions will only increase. It begs the question, how to we reach a point where humans and lions can co-oexist?

Follow the link to a gallery of lion images: majestic males, cuddly cubs and family live on the savannah.

Humpback Whales in the Monterey Bay

Breaching Humpback Whale off of Maui by the master, Flip Nicklin.

Monterey Bay waters are seeing a strong return of the anchovy this summer which has been a boon to whale and bird watchers. This past spring blue whales were spotted in high numbers.

Today we are still a twitter over humpback sightings in the Monterey Bay this past week. Last evening from one of our local beaches, a staffer counted 42 breaches (many where one could see the entire whale rising out of the bay) over a period of a hour or so. The activity level is akin to what one sees in Hawaii during the winter or Alaska during the summer. Additionally, close to the beach she spotted a single adult dorsal fin as well as fins of an adult and calf together. Amazing.

Add to the mix a large flock of seagulls, a massive flock of Sooty Shearwaters, assorted terns and California Sealions and it was an exciting evening on the beach.

A comprehensive 15-year analysis of the movements of satellite-tagged blue whales off the West Coast of the United States, by researchers from the Oregon State University Marine Mammal Institute, found that their favored feeding areas are bisected by heavily used shipping lanes, increasing the threat of injury and mortality. Paste the following link into your browser to link to a gallery of elegant, action-packed and humorous humpback whale images. http://bit.ly/1uEYsgE

International Day of the Tiger

In honor of International Day of the Tiger, we've assembled a gallery of of the biggest of the big cats. Whether it brings to mind Tony the Tiger or the more menacing Shere Khan of Jungle Book fame, one must agree that tigers sport with the best stripes in the animal kingdom. Check out www.tigertime.info for more information about efforts to protect this mighty but threatened predator.